These titles are available from major worldwide distributors, including:

The Pharaoh of Venice

Madeleine Galli is a young forensic psychologist who has just arrived in Venice to speak at a medical symposium, visit her aunt, and hopefully see some historic Italian art.

At her favourite café, she shares a table with a mysterious man who introduces himself as Logan Milan. Madeleine asks about his occupation and that simple enquiry sets in motion a chain of events, transporting Madeleine from her comfortable world into a new and far more dangerous existence where the laws of the universe she knows and trusts seem to have been twisted and replaced by a new set.

After a short but strange conversation, Madeleine agrees to meet Logan for an evening meal, partly to clarify some of the strange things he has said. Logan discovers that Madeleine has special abilities and talents which set her apart and make her very interesting to him. One ability in particular highlights her as exceptional, and it’s an ability she is completely unaware she possesses.

That decision launches the pair along a path that in equal measure becomes ever more dangerous and more mysterious as they struggle to unravel the meaning of the events whirling around them and race to unearth an object that is rapidly becoming the key to victory or failure – a golden cylinder reputed to contain artefacts of great power.

The stakes rise dramatically with each passing hour as they find it necessary to evade both the Police and their ruthless adversary who moves with increasing brutality to eliminate anyone who gets in his way. With the power of the objects contained in the golden cylinder under his control, his plans for global domination would be unstoppable.

Lindisfarne: Fury of the Northmen

Order from Amazon.com: Hardback/Paperback or EBook/Kindle

On the 8th of June, 793CE, Fenn is a young apprentice scribe at St. Cuthbert’s Monastery on the Holy Island of Lindisfarne in Northumbria, England. On that fateful summer’s day he is violently torn from one life and thrust headlong into another.

Two strange dragon-headed ships appear on the beach and savage raiders swarm ashore – the first Viking raid on English soil. Fenn tries to save the Lindisfarne Gospels, a priceless manuscript, but the gold and jewel-encrusted cover is ripped from the book and taken as Viking plunder. Fenn is dragged across the sea to a life of cruel slavery in a harsh and foreign land; to a society that could not be more different from his own.

After months of brutal existence, Fenn seizes an opportunity to escape. He retrieves the stolen cover of the Gospels and together with four other slaves including a talented, beautiful and mysterious young woman, sets out on a thrilling journey across a thousand miles of unforgiving landscape, pursued every step of the way by a ruthless and relentless Viking leader as the events of the times unfold and whirl around them.

This is Fenn’s story. A thrilling story of courage and determination in the face of adversity, of despair and joy, and of loyalty and love.

This book can be purchased from Amazon.com: Paperback or Kindle

If you enjoy these stories, please leave a review on Amazon.com 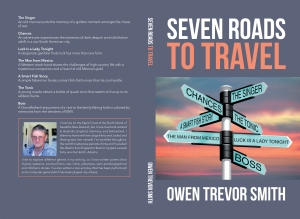 A collection of seven deliberately diverse stories (read a brief description of each story by expanding the image above), but they are all linked by a convention used in the first ‘spaghetti western’*

(The Tonic is an exception to this convention – when you read it you’ll understand why).

Read this independent review of Seven Roads To Travel

The Day Bonny Blue Raced for the Cup

This book can be purchased from Amazon.com: Paperback

If you enjoy this poem, please leave a review on Amazon.com 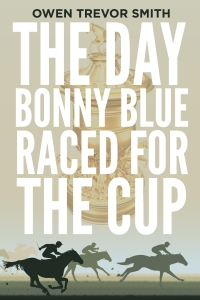 A thrilling and moving lyrical descriptive poem in the style of legendary Australian bush poets Andrew ‘Banjo’ Paterson and Henry Lawson. Australian bush ballads are renowned for their easy flowing style and comfortable rhythmic pace and this poem is a beautifully crafted example of that art.

A desperate Australian farming family caught in a drought and under threat of mortgage foreclosure in a few days, form a plan to enter their horse Bonny Blue in a horse race (the Carling Cup) with 16-year-old son Jack to ride her. She has raced before but was injured (long since healed) and now she works on the farm. Jack and Bonny Blue use their fighting spirit and their bond to overcome inexperience, prejudice and overwhelming odds in the race for the Carling Cup – a race destined to become legendary.